The Holographic Discs™ are laser imprinted with natural elements, sound, color, geometry, etc. that are selected based on the influence desired such as more energy, restful sleep, pain relief, and weight loss. The body retrieves the information stored on each holographic disc through acupuncture meridians which are activated through the body’s bio field achieving balance, harmony, and influencing the body for better health.

In 1994, the U.S. National Institutes of Health (NIH) established the term “Biofield”. The biofield is an ensemble or matrix of different energies that purportedly surround and penetrate the human body.

Modern physics tells us that our ordinary view of the world is very limited. We think of objects and ourselves as dense solid objects with little connection, but that is far from the truth. In reality, we are more space than solid and only the electromagnetic energy between subatomic particles gives us the illusion of solidity.

The atoms in our bodies can be thought of as particles, but they can also be thought of as waves or vibrations. Every atom and molecule emits a characteristic frequency of vibration. Those vibrations are reaching us each and every instant. We are not isolated from each other, but are constantly exchanging sub-atomic particles with everything around us.

When we look at another person we see the photons that are coming from them. When we sense the warmth in another person’s hand we are feeling infrared electromagnetic vibrations. In the brain, the process of thinking creates electrical signals that can be detected even at some distance from the body.

Exciting new research in mathematics and physics is leading to the conclusion that the four dimensional world (length, width, height, and time) that we perceive ourselves to exist in is, in reality, only a projection of a higher dimensional reality.

Like a two dimensional shadow cast on a wall by three dimensional objects, both we and our world are four dimensional shadows cast by five, six, and higher dimensional realities. This multi-dimensional approach is showing new directions for research into mysteries like black holes and super strings in space, and phenomena observed on other planets.

For thousands of years, the sages have taught that humans are not just a bag of flesh, bones, and chemical compounds that exist in space and time but, in addition, consist of subtle energies. That view is consistent with the view emerging in modern science,” Ron Moorefield, Vibratory Acupoint Balancing.

There are pictures of what appear to be energy fields taken with Kirlian photography. 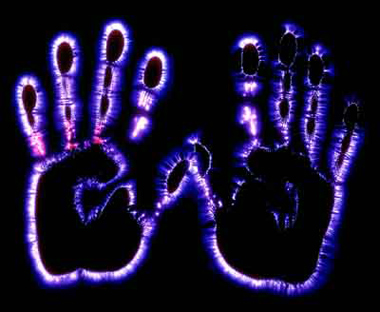 BioExplorer is used to observe a change in a person’s energetic pattern. Energy is observable in real time.

Energy medicine is a domain in CAM that deals with energy fields of two types:

Veritable, this can be measured.

Putative, that which has yet to be measured.

The veritable energies employ mechanical vibrations (such as sound) and electromagnetic forces, including visible light, magnetism, monochromatic radiation (such as laser beams), and rays from other parts of the electromagnetic spectrum. They involve the use of specific, measurable wavelengths and frequencies to treat patients.

In contrast, putative energy fields (also called biofields) have defied measurement to date by reproducible methods. Therapies involving putative energy fields are based on the concept that human beings are infused with a subtle form of energy. This vital energy or life force is known under different names in different cultures, such as qi in traditional Chinese medicine (TCM), ki in the Japanese Kampo system, doshas in Ayurvedic medicine, and elsewhere as prana, etheric energy, fohat, orgone, odic force, mana, and homeopathic resonance.

Vital energy is believed to flow throughout the material human body, but it has not been unequivocally measured by means of conventional instrumentation. Nonetheless, therapists claim that they can work with this subtle energy, see it with their own eyes, and use it to effect changes in the physical body and influence health.

Practitioners of energy medicine believe that illness results from disturbances of these subtle energies (the biofield). For example, more than 2,000 years ago, Asian practitioners postulated that the flow and balance of life energies are necessary for maintaining health and described tools to restore them. Herbal medicine, acupuncture, acupressure, moxibustion, and cupping, for example, are all believed to act by correcting imbalances in the internal biofield, such as by restoring the flow of qi through meridians to reinstate health. Some therapists are believed to emit or transmit the vital energy (external qi) to a recipient to restore health.

In thinking about the human energy field it is helpful to understand some basic physics notions. The smallest observable particles are called quarks. They are so tiny that you cannot even image how small they are. Yet, string theory believes that these tiniest of particles are made of even smaller things that are called strings. Strings are in a constant state of vibration and the characteristics of their vibration are what determine the characteristics of the quarks and the objects they make.