Energy Medicine – The Next Frontier

“We begin to realize that the next big frontier…in medicine is energy medicine” – Dr. Mehmet Oz 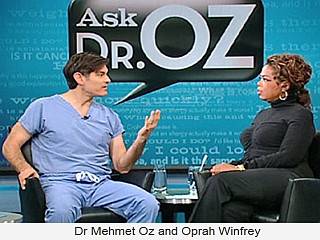 Energy Medicine brings flow, balance, and renewal to the body’s vital energies and energy medicine is the oldest, safest, most organic, most accessible, and most affordable medicine there is.

Today’s science is now able to capture the power and energy of nature and fuse them into products that you can utilize in your own healing, health, and well-being. Increase Energy, Reduce Pain, Lose Weight, Sleep Better, Detox Purify, Boost Testosterone.

Like a computer disc or music disc, information using cutting edge technology is stored on each hologram. When the hologram is applied to your body or clothing, it enters your body’s energy field. Once the disc, which looks like a nickel-sized silver sticker, is in the energy field, your body accesses the information stored on the Data Disc™ The energy field becomes the carrier wave for the accessed information to stimulate the acupressure point just as needles would do in acupuncture.

The Energy Of Life 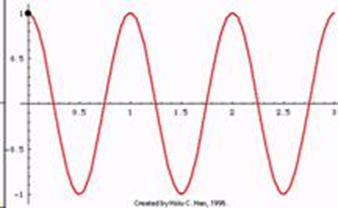 Our muscles are powered by chemical energy. The food that you eat for dinner are really just fuel for the fire. Eating is like throwing coal in a furnace. Digestion is nothing more than a slow form of burning that produces energy for your body to live on. In fact, death itself is defined as the absence of electrical activity in the brain. In the end, all life is energy.

Optimize that energy and you optimize your health.

Charge your body with the right frequencies and you prevent disease.

The same laser light that is used to shoot down enemy missiles or as a death ray in a movie is also used by your eye-doctor to improve your vision via Lasik surgery or by your plastic surgeon to remove facial hair and wrinkles. Again, the difference is merely one of frequency and amplitude.

The proper use of energy in the healing arts has a long and significant history. From the TENS machines and laser surgery that we’ve already mentioned to the use of sound waves to break up kidney stones, or X-rays and magnetic fields to see into the body to the use of light to clean the blood.

Some forms of energy are more effective than others.

We are about to talk about some things concerning health and nutrition that are probably brand new to you. This topic is not inherently difficult to understand, but since it represents a total paradigm shift in how you will look at health and nutrition, we will have to proceed slowly.

We’re going to learn how to actually embed healing energy in nutritional products.

Also, in order to explain everything, we will have to touch on some very esoteric areas such as higher mathematics and sub-atomic particles. Don’t panic. It won’t be too involved, and after every difficult section, I will summarize what you just read and tell you the key points you need to remember.

We’re also going to learn how healing energy frequencies are transferred from the products you ingest into every single cell of your body – with profound implications for your overall health.

With that said, let’s begin.

The Nature of Energy

All of the energy that we normally think of is characterized by both particle and wavelike properties. The waveform of all these energies can be graphed as a hertzian wave (either in the form of a sine wave or a step wave).

We’re talking about everything from electricity to magnetism, from light to sound. The only difference between all of these forms of energy is how fast the waves rise and fall (the frequency) and how intense those rises and falls are (their amplitude).

Scalar energy, however, is a different animal. Understand, scalar energy has always existed – since the beginning of time – however, it’s only recently that scientists have discovered and begun to make use of it.

It was actually back in the mid 1800’s that the existence of scalar energy was first proposed in a series of 4 groundbreaking equations by the Scottish mathematician, James Clerk Maxwell. 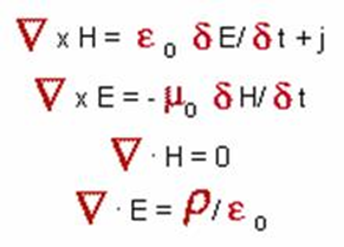 Don’t even think about trying to understand these equations.

Just as a minor reference, H refers to the magnetic field. E refers to the electric field. Most of the other symbols are Greek letters such as epsilon and delta. The upside down triangle represents the Vector Differential.

But forget all of that. The key to these equations – what makes them remarkable in history is the use of the  symbol

, which stands for the Scalar Charge Density – thus representing the first time that the existence of scalar energy was theoretically proposed. (For the mathematicians and physicists among you looking for a more complete exploration of how Maxwell’s equations demonstrate both vector magnetic potential and scalar electric potential, check out NASA’s Learning Technologies Project site.1)

What are Scalar Waves

The standard definition of scalar waves is that they are created by a pair of identical (or replicant) waves (usually called the wave and its antiwave) that are in phase spatially, but out of phase temporally. That is to say, the two waves are physically identical, but 1800 out of phase in terms of time. The net result is that scalar waves are a whole different animal from normal hertzian waves. They even look different – like an infinitely projected mobius pattern on axis. (For more information, check out Pure Energy Systems’ scalar field theory page.2) 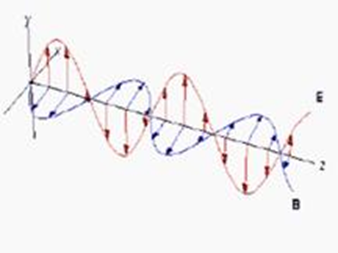 Scalar energy is different from standard hertzian electromagnetic fields in a number of important ways.

Actually, scalar waves can be generated in many ways. For example, you can generate them Electronically, Magnetically, Physically (by the motion of a mobius strip), or Optically (by the movement of phased patterns on a computer monitor).

As I mentioned earlier, The proper use of energy in the healing arts has a long and significant history. From the TENS machines and laser surgery that we’ve already mentioned to the use of sound waves to break up kidney stones, or X-rays and magnetic fields to see into the body to the use of light to clean the blood. For example:

And In Your Very DNA

We are going to get very abstract, for one final moment, before we begin to simplify everything and bring it all together. So just hang in there for a little longer.

There are Quantum Mechanical models that describe subatomic particles such as Excitons, Plasmons, and Solitons that can store and carry biological information along macromolecules in response to low level scalar energy.

In other words, scalar energy is capable of imprinting itself on your very DNA.

Before we move on to the benefits of scalar energy for your health, it would be worth dwelling for a moment on what proof exists that everything I’m talking about is real.

It is possible to measure scalar fields, but most people don’t have the required equipment. Therefore, let’s turn to a form of proof that we can see right now – Kirlian photography. A Kirlian photograph is merely a specialized kind of photography that images the bioelectric field that surrounds all objects – particularly living objects.

U.S. News and World Report ran an article some time ago calling Kirlian photography a hoax. To quote from the article:

“Controlled experiments have shown that the Kirlian photos (captured by passing an electric current through the subject, whose “energies” are then recorded on special photographic plates) are the result of moisture and pressure, not spiritual vitality.”

And that’s absolutely true, as far as it goes. The simple fact is, though, that it’s possible to set up a hermetically sealed environment where moisture and pressure are constant, and therefore not influencing the outcome of the pictures. And yet, even in those controlled environments, it’s possible to produce startling and revealing photos.

For example:
Here are two pictures of lentil sprouts – identical, except for the fact that the lentil on the left has been soaked in very hot water for a minute or so. According to the U.S. News and World Report article, since it has more moisture in it, it should conduct more electricity than the unblanched lentil on the right and produce a brighter field. 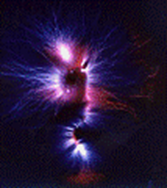 As you can see, the exact opposite is true. (If you’re looking at a black and white printout, the greatly expanded red area appears dark gray.) And that’s why the National Institute of Health and Cambridge University, among other major institutes, are studying Kirlian photography, despite claims to the contrary.

So what can we learn about scalar enhanced products through Kirlian photos? Well, the absolute most important thing we can learn is that the scalar charge is, unquestionably, embedding itself in the products. Below are just a couple of examples of products before and after embedding. 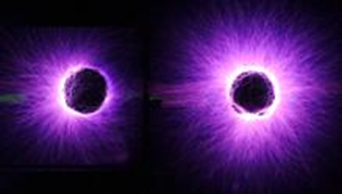 Left – Before embedding Right – After embedding 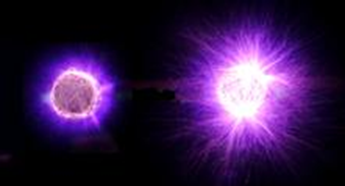 Left – Before embedding Right – After embedding

The two sets of photographs above, by themselves, are revolutionary in their implications. (Incidentally, these images were produced using a brand new process – side-by-side direct digital imaging, which even further diminishes the effect of outside factors such as moisture, temperature, and pressure.)

The bottom line is that experience tells us that the more alive something is (the more organic it is) the bigger its energy field will be. And energy enhanced products always demonstrate a bigger field.